Book 1     A STORM IN ANY PORT  (Mentioned in Edinburgh Life Magazine).

Leaving common sense and responsibility behind, middle-aged Zander and his inept crew set out from the West Coast of Scotland’s  mainland anchorages at Ardfern, Mallaig and Arisaig to inflict themselves on The Small Isles, Mull, the Isle of Skye and both the Inner and Outer Hebrides.

On board A Puffer, an Americas Cup boat and a number of yachts named Emerald, they embark on an odyssey of innocent incompetence around these mystical islands and picturesque harbours. At almost every turn they find themselves in conflict with  something or someone, invariably with hilarious and usually unexpected results.

Once again Zander and his crew of miscreants embark on voyages of discovery: voyaging recklessly and discovering that they are not as smart as they think they are.

This time the mischief takes place in and around the towns, harbours and marinas of the East as well as the West Coasts of Scotland and Zander even gets to Algeria.

They also find time to rub shoulders with night club bouncers, ferocious dogs, pickpockets, mad majors and officialdom at large and usually, at some point, rub everyone up the wrong way.

Sailing is only the vehicle for their travels, but how else would they get to places where no one knows them?

Still searching for riches and recognition, Zander has a mid-life crisis, no longer going sailing and ground down by household duties, he has swapped the hazards of the sea for those of the golf course. The stage may be new, the action different but our leopard cannot change his spots. Golf is the vehicle that carries us through this account of the good, the bad and the ugly of the players, officials, and downright oddballs who populate the game of golf.

While playing his own (not so competitive) game over some of the best golf courses in Scotland at a number of corporate outings, Zander stumbles upon Hells angels, Sneaky spaniards, Dangerous wildlife, Overgenerous sponsors, a Wealthy alchemist, a Phantom, a Generous pawnbroker and a Canny minister among others.

Re-assembling his old crew, our hero takes to the waters of the Norfolk Broads, where he gets caught up in a series of unimaginably crazy life changing events. 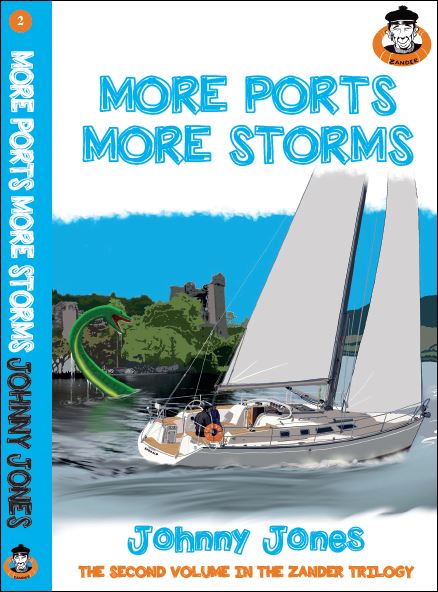 Four Men in a Dinghy